Earlier this week I noticed a post on MoDaCo talking about newer builds of Windows Mobile 6.5.  By newer, I’m of course comparing the builds to what’s publically available in the emulator images as part of the Windows Mobile 6.5 Developer Toolkit. As I’m currently wielding a HTC Touch Pro device (which for the record was one of the worst purchase decisions I’ve made due to the lack of support from both Expansys Australia and HTC) I figured I’d take a look at some of the xda-developer roms that they’ve been cooking with the latest Windows Mobile 6.5 bits.  Here are just a few screen shots from the NATF_WM6.5_TP_Lite_v5.5A ROM.

Disclaimer: Please note I would NOT recommend trying cooked roms as they have the potential to brick your device – do so at your own peril. This post is just to highlight some of the new functionality that we may be expecting in production WM6.5 devices later this year. 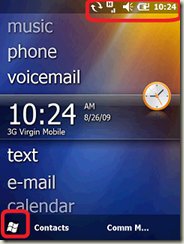 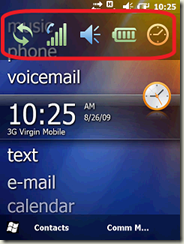 2) Start – this is no longer in the notification area, appearing instead in the SIP/Menu bar at the bottom of the screen.  This is applied throughout the device, not just the today screen. 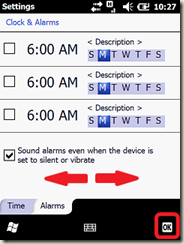 3) Ok – this has also been moved out of the notification area and placed in the SIP/menu bar.

4) Gestures for Tabs –gesturing left and right navigates between tabs. 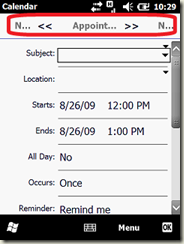 5) Slide Tabs – instead of tabs appearing at the bottom of the screen, they now appear as “previous and next” headings at the top of the screen.  You can use left and right gestures anywhere on the form to navigate to previous or next tabs. Note that they are cyclic so you can keep going “next” (or “previous”) to go repeatedly through all the tabs – imho not particularly intuitive as there’s no indication of what all the tabs are and how to jump straight to a specific tab. 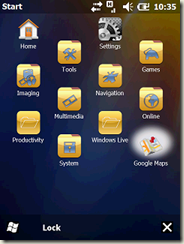 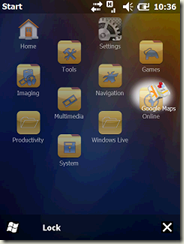 Now I’m sure there are other new features that I haven’t come across but these are the ones that after 20secs caught my eyes.